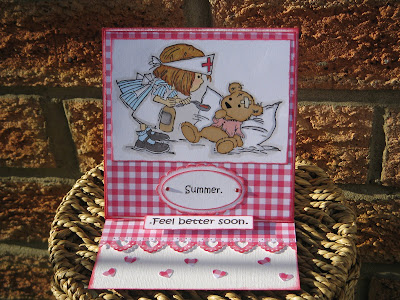 Morning peeps!!!
I had a super day yesterday. First it was a day at cricut club which is just always so much fun, I made 2 cards which I will post later in the week. Then onto babysitting for my 2 fav little people in the evening ( though I must admit they are not quite so little anymore!!!!)
I made this little card for my friend's niece who had a small battle with a trampoline, she slipped under the net to get out and took a tumble on the way and came off slightly worse for wear bless her. I don't know her too well as I have only seen her a little handful of times but she is one of the cutest little girls and I felt so sad that she had hurt herself. Her aunty ( my friend) keeps us updated and summer is now home after a yukky couple of days and an op to wire her little bones in her arm up to heal.

I thought that my cute little LOTV nurse stamp would be a good one too use and teamed it up with an easel fold, martha punch and of course some gingham funkyhand paper ( I love gingham!!!!) I made the sentiment on my computer in one of my favourite fonts. I used the little hearts that punch out to decorate the white cardstock under the punched edge.
We also have a new arrival in the daubney household, rather a surprise though!! I just happened to be getting the cucumber ready for our african snail, Speedy Chuggington. ( speedy from ryan, chuggington from Mo) and I saw this little lump on his (....her?!) foot near the shell. On closer looking ( after thinking omg? what is that? and can you take a snail to the vet?...) I realised it was a teeny tiny baby snail!!!! awwwwwww!!! Then when I put the cucumber in it slid down the foot of chuggington and got onto the cucumber!!!
Anyway, I called Mo ( who was engrossed in lego making...again!!!) and told him to look what was in the tank. Well, you have never seen such a happy little boy!!! So I said to him " what do you think we should call the baby snail Mo?" he replied
" We have to call him whoopsie mummy because we didn't know he was coming"
Well, scott and I had to laugh!!!! ( lou had visions of Mo being born and being called whoopsie as we didn't know he was coming either!!!!! lol!!!!)
So here is little whoopsie you can just about see him on the edge of the cucumber!!! 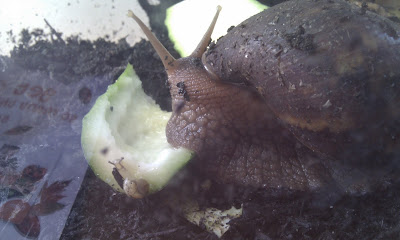 (...and yes, I am frantically searching the tank hoping there are no more after being told by my brother that they have squillions of babies!!!)Right I am off for a cuppa, to get the washing machine on and get caught up with ironing. We were going to womble to the shop but Mo has requested a pj morning so that will have to wait a while!!!!

Gingham paper from my funkyhand Colour me Happy papercraft factory.

Thankyou for popping in!!!