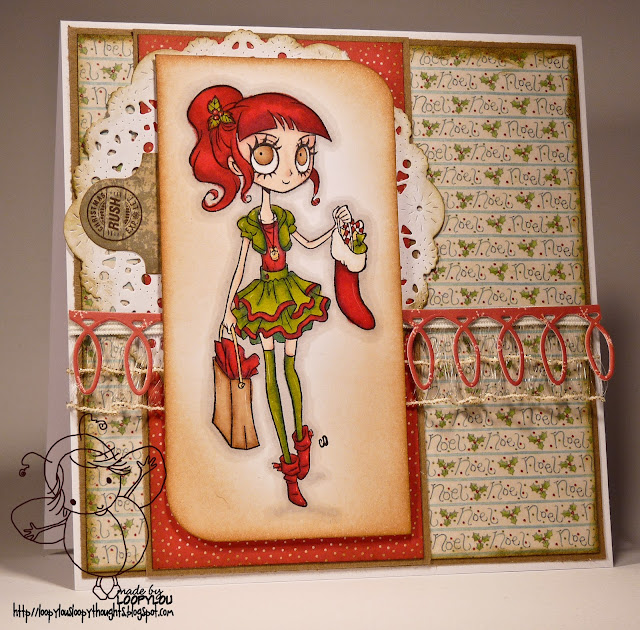 Here I am with another chrimbly make, I can't get enough of them this week as I am so excited about christmas!! Its raining here...blurgh!! so later I am going to take my little furball princess for a quick walk around the nature reserve this morning on the way to have a cuppa with a dear friend. There are many walks around the reserve but the one I am going on is just 20 mins long which is prefect for little furball princess leggies!! I have plenty of little treats nestled in her little pink treat pouch as I am still setttling her into her halti lead, which she is taking to beautifully but loves the occasional paw to get it off!! cheeky pudding!!

For this card I used CC Designs Shopping Ivy she is fab isn't she?!! I just had to colour her up in traditional christmas colours with my promarkers.

The papers are from the First Edition Festive Treats pad , with a length of gorgeous Sparkle edge gold trim, (this trim is totally delicious!!) across the centre. I also added a cute bit of Loop Border over the top edge of the trim because it does so look like christmas lights and I love it.......I am actually a little addicted to it at the moment!!! oh and there just had to be some use of my fav doily die too!! its the Cheery Lynn French Pastry die.

And here's a piccy of my little guy with his nativity this weekend, it is his fav advent activity as it is something he shares with me dear cyber friend Shirley. he looks forward to the 1st december from october onwards and this year he was super pleased as there were camels!! oh my you have never heard such glee as those camel boxes getting opened!! 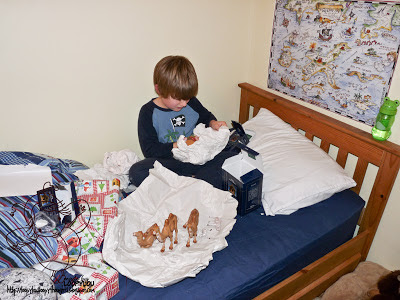 ....yes he is still into pirates too!! he has had that poster behind the head of his bed for 4 years now! it used to have a black frame and he was devastated when I knocked it dusting one day and it fell and broke :( (luckily the pirate map was totally fine so that stopped the tears!) and every single night we have to pick an island to go to in our dreams. I LOVE that, its so cute!!

You will have to excuse my gushy mamma moments!!I just love this little guy so much!! we had an awesome weekend.
After a couple of years of being terrified of the water ( due a not so nice swimming teacher experience when Mo was 3) We searched around and found some lovely swim teachers and after 10 weeks of lessons. He has had to start from scratch because of his fear and nerves but and yesterday Mo got his 5 metre badge at swim club.

I was so proud because he sobbed when his teacher sent him to try out for it but after a little teacher and Mo pep talk he got in and swam just over 5 metres, he didn't make it to 10 but that didn't matter because proud mamma was already in tears watching and Daddy could not believe his eyes.....his swim teacher was so proud because he knew Mo would be able to achieve that if he could just relax in the water, Yey!! go Mo!!!

Right I have waffled on enough!!

Thank you all so much for popping in on me,Huge hugs Lou xx
Posted by Loopylou. at 06:00 10 comments: