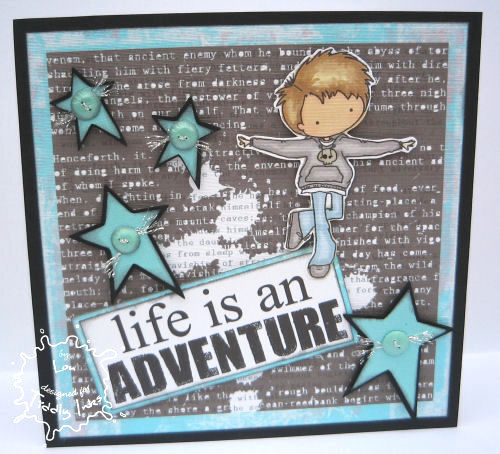 Image- Ty the tapdancer from Tiddly Inks.
Papers- Grunge star (past freebie) and Ty's Splatter paper from Tiddly Inks.
Promarkers- vanilla and oatmeal-skin. Cool grey 2,3,and 4-Jumper.
Pastel beige for the skull! Denim blue and pastel blue-jeans
Buttercup,sandstone and caramel- hair.
Sentiment- freebie from our fabulous Femke.
cricut cut stars.
buttons made from card candy!!
Hello peeps!!!
yep, 2 posts in one day!! I am cooking on gas today!!! lol!!!
No, in all seriousness﻿ I got a message from my big sister today to say that my fabby nephew, Jake, has got a place in the secondary school he really wanted to go to. I am so excited for him as they specialise in drama and he especially wanted to go there because of that. I decided I needed to make a card for Jake to celebrate. Secondary is such a big deal because they go from being the oldest at primary school to being the teeniest peeps at their secondary school.
Christy put up a new image in the store last week called Ty the Tapdancer and I just knew he would be perfect for a card for Jake. I coloured him up and cut him out so I  could use Femke's awesome word art for Ty to dance away on and cut myself a few stars on my cricut ( linkies for all up at the top).
Now I didn't have any buttons to match my yummy blue cardstock on my stars so I had to have a bit of a think......cogs whirring....oooooh I could make a button out of some of my card candy!!!!! yey!!!!! I made 4 little buttons with some silvery thread through them.
So I promise that is me done for the day now!!!!! if I make anything else I promise to save it for tomorrow but I was so excited about this one!!!!!
Huge hugs Lou xxxxx
Posted by Loopylou. at 16:52 14 comments:

A betty for the boys!! 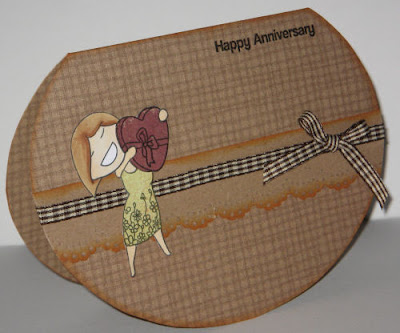 Morning peeps!
I have been having a  bit of a play with the templates on my Craft the year away papercraft factory from Funky Hand! oooh I love them, they are so quick and easy to use.
Fir this one I used the wobbler card template and our Betty!! I was determined to make a card for the male species using Betty because she is so versatile. This Betty is from there Love n that stamp set. That gorgeous chunky sentiment is in the set too!!
I couldn't resist punching a little Martha border but kept it all manly with the browns!!
Betty is paper pieced, a bit of green patterned paper for her dress and a yummy browny coloured patterned paper for her choccy box!! I used vanilla and soft peach promarkers to colour her skin and her hair is caramel and sandstone.
Right,better get some lunch made and get myself ready for the school run and work!
hugs Lou xxxx
Posted by Loopylou. at 08:11 6 comments: