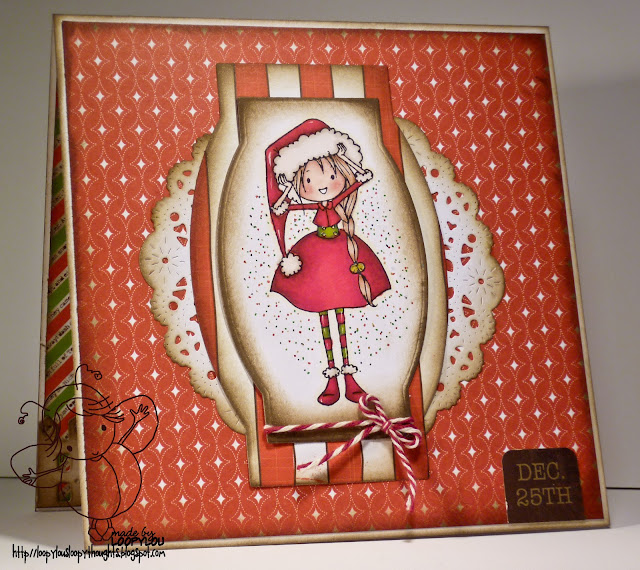 I hope you have all had an awesome weekend, I totally did! we went to Harry Potter Studios and it was the best day out. We walked around in awe and drank butterbeer and just loved it, more on that and piccies in a min!!!

My super cute little share for today is Evie and she is just adorable. She has such a fun little pose and face. I just had to try out the designer labels stax 4 Tracy popped in my DTDF DT box, they are such a beautiful shape. I tied a little MME merry and Bright twine around the bottom of it and it looks so cute.

I coloured her up with promarkers,the colours are...

I dotted some copic spicas around her and glaze pen too, its so hard to see in the piccy buut it does look so pretty.Inside I popped another piece of the Bo bunny Mistletoe paper and cut a little magnolia doo hickey fence and popped it in on the bottom.

Squeeee!! onto our Harry potter day!!! oh my!! ok, so first I should tell you we totally surprised Mo with this weekend! Scott's mum very kindly bought us the tickets and a night in a hotel nearby for Scott's 40th birthday which was last week so knowing Mo would LOVE it we didn't tell him about it!!

On saturday just after lunch Scott dropped Poppy off at his mums for a nannie sleepover (....never under estimate how tough it is to kiss the furball princess and send her off for a sleep over at nannies...I cried buckets!! daft mummy!!) we told Mo she was going to nannies as we were going to pop out for a drive and were worried she might need a wee while we were out!!!! then once Scott was back we got in the car (clever Daddy sneaked the bags into the boot under a blanket!!)

It was a lovely drive! Mo loved looking out of the car window and thought it was so much fun when we kept saying "lets see whats down this road" !! it was such an adventure for him! When the hotel was near ( I thank the inventors of sat nav...) I told Mo I needed a wee and could we stop for one. He thought a wee in a travel inn would be fabulous and as we walked towards the doors he told us how he would love to stay the night in one and how much fun it would be...so you can imagine how excited he was when after wee's we went to the check in desk to get our room key!!! oh I tell you its these moments that make you melt as a mamma and daddy! he gave us the biggest excited hugs!

Once booked in we headed for the pool and had a great swim, then it was out for tea in the hotel restaurant which he loved. He even wrote a thank you note on the napkin for the chef...then he asked our waitress to take it to the chef, when he got the note he shouted thank you and waved to Mo across the restaurant which Mo loved!! bedtime followed and Mo was out for the count in roughly 2 seconds!!

When we woke up sunday morning we went for another swim and had breakfast then told Mo it was time to go home and we got into the car....we didn't tell him where we were going and as we drove up the the studio's he still didn't quite cotton on to where we were going!! he he he!! when we got to the car park the man at the gate asked to see our tickets and thats when it sunk in where we were though still not fully!! the man at the gate thought that was wonderful that it was such a surprise for Mo and he told Mo it was sainsburys inside!! romfl!! it wasn't until we parked up and Mo saw the huge pictures and chess pieces outside that it all sunk in and his excitement started, it was magic!! I took his HP costume with me so he changed into that and was ready to explore! he was given a little digital headset tour..which he absolutely adored using and then it was just awesome exploring.

I am not going to tell you too much more incase you are going yourselves but it was the best day and we LOVED it!! I will leave you with a few piccies from our day... 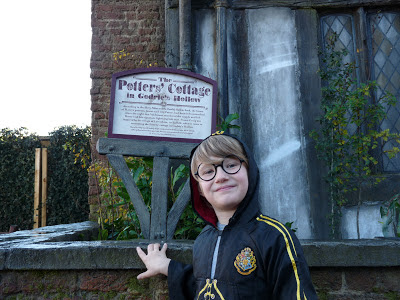 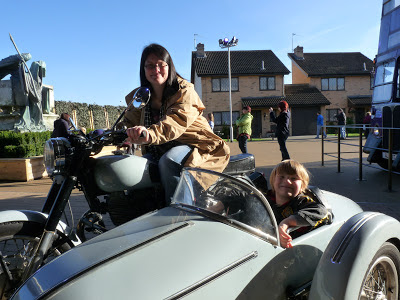 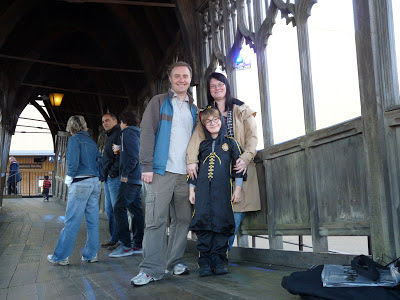