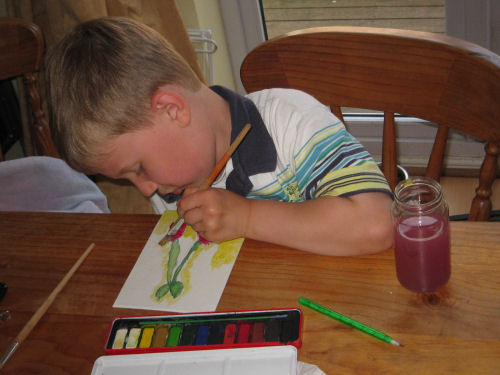 Well this isn't a me post today, its a Mo post!!!!
When we went to the garden centre on monday Little Mo treated himself to a 6 pack of canvases for £2.99, bargain he said!!!!
As soon as we got ome he set to work on his first painting! he asked daddy what his favourite fruit was and daddy said cherries....... 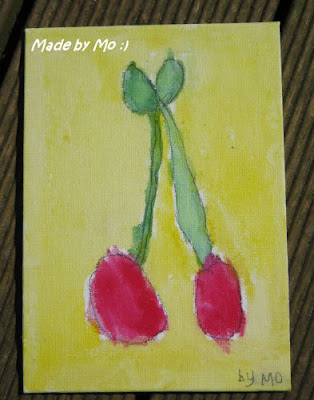 Then he was off outside for a bit of a play with his little buddies. Half an hour later Mo Da Vinci was back and "fancied doing a bit more artwork" !!! oh he's so funny!!! I was informed it was my turn to have a picture. I was just noseyingat my good friend Christy's new little owl image and Mo saw it on the screen. "Ooooh mummy, I will do you an owl!" and off he set again!!! 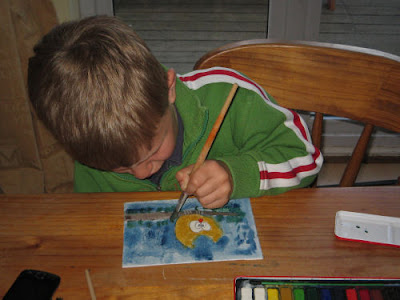 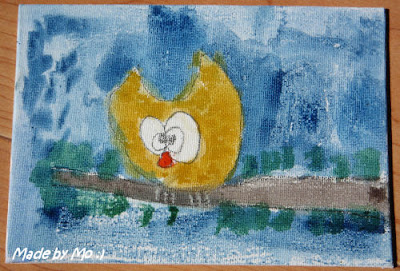 Then yesterday morning he decided he needed to paint his bestest friend, Dylan Dog. He has had him since the day he was born and Dylan still comes everywhere with us!!so he had a live drawing session with Dylan!!! He set him out as he wanted him and then got busy.... 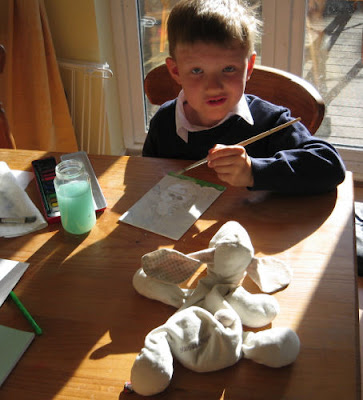 Yup, he's a bit asthma-y and sore in this picture! he was ok for the rest of the day though! Dylan in the grass with flowers!
Awwwwww, his little face of concentration on each one is so sweet!!I have to admit Scott and I were both fairly surprised by how much time and concentration he took doing them,(... hence the proud mummy snapping away with the camera!!!!)
He drew his main part of the picture with pencil first and made up the backgrounds when painting the main picture! I love them!!!
Well, thats me for today i think, I am hoping to get out in my little crafty garage this afternoon when I get home from work and get some crafty time for me in!!!
Have a great day peeps !!  Hope this post made ya'll smile,
hugs Lou xxxx
Posted by Loopylou. at 07:30 6 comments: